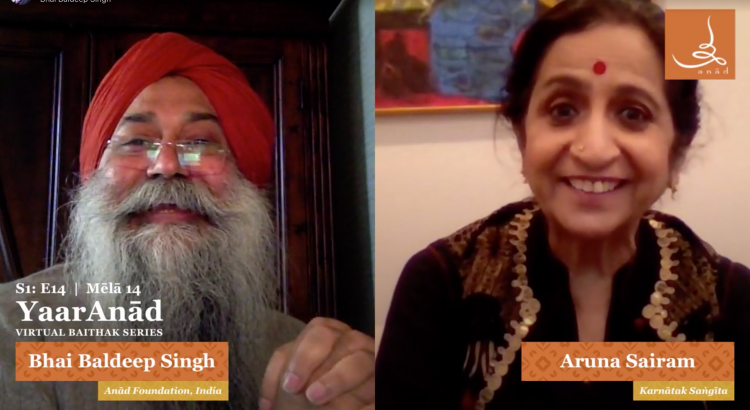 A few days ago I had a conversation with Bhai Baldeep Singh, live on Facebook. It was for an episode of YaarAnād Virtual Baithak Series which is an extension of the World Music Heritage Series of his. The aim of this series is to celebrate excellence in the field of music, arts, dance, theatre, and literature.

Bhai Baldeep Singh has been inviting a number of talented and accomplished artists from various genres to his show for a really informative and entertaining conversation on various art forms. I feel it’s a very important service that he is providing to all art lovers around the world – especially at this current time of uncertainty and crisis – when art is the only thing that can give us hope and calm our minds.

During our conversation that went on for almost 3 hours (as they say, ‘time flies when you are having fun’), we spoke on myriad topics starting from the collective evolution of music over the years to gamakas and alankaras – punctuated by songs sung by me and Bhai Baldeep Singh. It was a treat to listen to him sing a Gurbani. We discussed in detail the confluence of music from various parts of our diverse and culturally rich country that resulted in the current flavours in our music as we see it today.

You can watch our video below:
Any enthusiast of Indian classical music will find our conversation interesting. Hope you enjoy listening to our session.
A huge thank you to everyone who watched our session live and commented with such kind compliments.