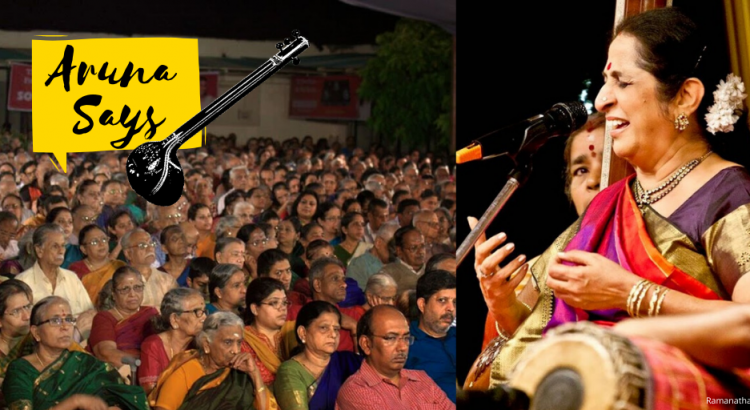 Chennai season is a tough taskmaster.

Margazhi is an enchanting season, infused with the smell of wet earth and fresh flowers, and music and communion with the divine. It is not surprising that Lord Krishna says in the Bhagavad Gita that among the months, He is margazhi.

And of course, it is the time of the Chennai music festival. Whenever people worry about where the Karnatic live concert is going, all they need to do is spend a few days here to set them at peace.

Speaking as an artist, I can tell you that the season is a tough taskmaster. Expectations are very high. With every piece, each artiste hopes to gain a few inches more of stature, and it keeps us all striving for excellence.
But the good thing is that after such intense preparation, I can take a quantum leap with the material that I have in my basket for the rest of the year.

I start thinking about my performances weeks in advance. I take a piece of paper and put down the different dates and venues, and then revisit it on a day-to-day basis, to put down things I can do for each of the concerts. You can’t repeat your repertoire, as sometimes the same audience may turn up for two concerts.

People have a few favourite renderings which they want to hear again and again. But I also have to sing new pieces so that others don’t feel like walking away saying she is singing the same thing.
This year I am doing seven concerts, most of them within the Mylapore-Mandavalli area and within a short period of time.

Each venue has its own identity and its own listener base. Each group has its own way of approaching a concert, listening to it, appreciating it, dissecting it and critiquing it. They are all different from each other, right down to where they nod, and where they smile, and at what point of the krithi or alapanam they give an appreciate tsk!

Take the Music Academy, Narada Gana Sabha and Mylapore Fine Arts. These three venues are within 1 to 1.5 km apart, all in Mylapore.
The Music Academy has a strong academic orientation. In its morning lec-dems and technical sessions, every raga and every nuance of a rendition is discussed threadbare. Music is argued, minuted and put down in journals. It’s like a vidwat sabha. And when I go there to give my evening performance, this is very much on my mind.

When I come to the Narada Gana Sabha, located on TTK Road, I remind myself that it has a strong bhajana sampradaya.  Mylapore Fine Arts, on the other hand, is a partially open structure, and the atmosphere is easy. Here, tickets are slightly easier to come by, and you find an eclectic crowd.

But wherever you go, excitement and enthusiasm are undimmed, and the atmosphere is like no music festival anywhere in the world.

I once got a call at 5 am during the peak of the Chennai music season from Shri N Murali, the president of the Music Academy asking me and my husband Sai to rush over to see the scene outside the Academy. I was scheduled to perform there later that day. Getting tickets here is difficult as the Academy already has a large member base. A certain number of tickets are allocated for guest listeners (non-members) on the morning of the performance. Serpentine queues led outside the Academy with the first person having arrived at 4 am to take his position at the head of the queue.

To me, it was a revelation.

Two of my concerts are for the Margazhi Maha Utsavam at the Hare Krishna Centre, Thiruvanmiyur and the Margazhi Utsavam-Jaya TV at Chettinad Vidyashram.

If I am singing at the Chettinad Vidyashram, it means going for a soundcheck in the afternoon, and arranging for coffee for people who have been waiting there since 10.30 a.m.
When I am on stage, these very rasikas are in front of me, occupying every inch of space, in front of chairs, squatting on the floor…

Like any artist, I feel that compulsion to respond to this spirit in like fashion, giving the best of my music.

See you at the season!