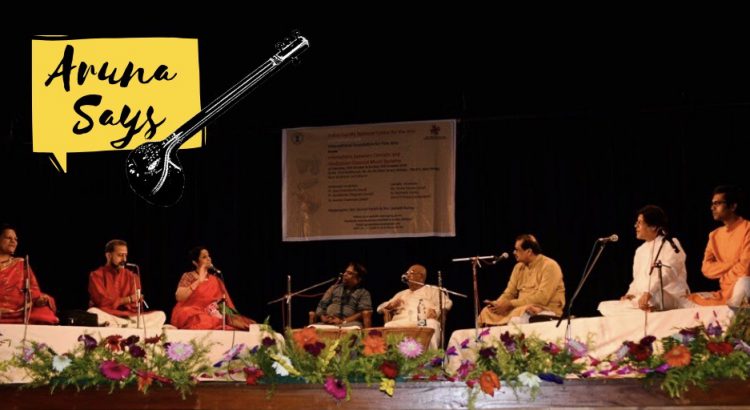 Pick up your iPod, and play your favourite krithis, or even just the aalapanam, in any ragam. Which are the parts you particularly enjoy? What appeals to your imagination? What are the “tools” that the vocalist is using to create that magic?
If you think about it, it won’t be long before you zero in on the gamakas. It is a feature quite unique to Carnatic music, though such gliding or manipulated notes are employed in a variety of forms, both Indian and Western.
As someone who has grown up and trained in Mumbai before moving to Chennai (my folks were of course from the Cauvery belt), I am equally comfortable in the different cultures and music traditions of North and South India. But there is something very special about the gamaka, and it often comes up in discussions comparing Carnatic and Hindustani music.
I participated in one such discussion recently, in Kolkata. It was a seminar called “Uttar Dakshin” organised by the Indira Gandhi National Centre for the Arts (IGNCA).

Very early I started speaking about gamakas. Arvind Parekh, Sitar Maestro, and Ganesh Kumar, President, Fine Arts Society, Mumbai, were the moderators. Arvindji asked me, why do Carnatic musicians talk so much about gamakas?

Immediately, Ganeshji said ‘why not’! My sentiments too, but we actually have to go beyond a mere ‘why not’. I have also gone into this subject in many of my concerts when listeners ask me questions.
The Gamaka is not just an ornamentation or an optional accessory. Indian classical music is something that goes deep into the intricacies of melody. If we are dealing with microtones and subtle sounds and oscillations, we have to deal with gamakas, we have to talk about gamakas; we have to listen to gamakas.

Sometimes it is useful to come up with visual imagery to describe music.
Any note in the Hindustani system would be a straight note that curves and bends. The sustenance of a note, its extension, becomes very important. Any note in Carnatic can be imagined as a curved note that straightens. A single swara gains a lot when you present it with microtonal variations. As musicians have pointed out, it is the gamaka that moves and animates the note.

What is more, gamakas are part of the raga lakshana, and a different gamaka can change the raga itself. For instance, Todi with different gamakas would sound like Sindhu Bhairavi. Hamsadwani, on the other hand, has few gamakas.
That is why there is a more of a preoccupation with that swinging kind of gamaka in the Carnatic system whereas there are more of the gliding kind of oscillations used in the Hindustani idiom. The goal is always the same – emotional impact.
Of course, many Carnatic ragas have been imported into Hindustani music.  In that discussion, for example, sarod player Buddhadev Dasgupta spoke about imports into Hindustani like Charukeshi and Amruthavarshini.
But the treatment can be very different. What is more, in Hindustani, with the same arohanam-avarohanam, you have three different ragas — Bhoop, Deskar and Bhopali. Depending on the emphasis of the phraseology and the notes that you emphasise, you can be singing three different ragas. Whereas in Carnatic, in whatever style you sing Mohanam, you are always singing Mohanam.

Likewise, in Hindustani, the same taal, say a count of 8 beats, can get demarcated into three different taals depending on how those 8 beats are redistributed within itself. In Carnatic music that does not happen. Eight beats mean Adi taala. The accompanist can put in any number of distributions, sub-distributions into that taala, but it will still remain Adi taala.

So, to me, the gamaka is integral to Indian Classical music. It is an important tool to achieve what is the objective of all music — to touch the soul, the heart of the listener.